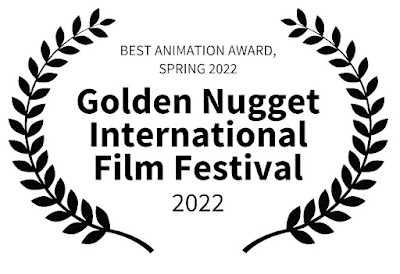 Golden Nugget had a subtitles requirement. View that version on Vimeo:
https://vimeo.com/666695009

I remastered and entered "..Seville" into "Golden Nugget" after I was impressed by their NZ screening. My review of that:
https://iafilm.blogspot.com/2020/11/indie-screenings-finding-audience.html

Posted by iafilm at 2:25 AM No comments:

"The House of Seville" (18 min) is our animated mock horror ghost story based partly on "Carmen".

Posting "The House of Seville" on Youtube for public viewing raised the question of audience rating. Our movie has animated violence with a murder scene based on the "Carmen" story. In our discussions we thought it was a low level issue and we should use the Youtube upload option "not made for kids". However when I did the upload and carefully read the Youtube guide notes I made the call to "play it safe" and go "age restricted". 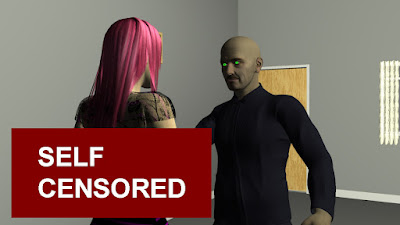 We work with a storytelling trope that ghosts are obsessed with causing the living to reenact their deaths. Here, the ghost of Carmen takes control of Ray and causes him to kill Daria with a sword. The critical items from the Youtube checklist are (1) the audience can see blood and (2) the editing and animated camera point of view highlight the blood beyond incidental detail. This is balanced by a non-realistic animated depiction.

Blood is a major rating element. I went through an exercise of reviewing Youtube scenes of violence and other content that could be challenging for sensitive viewers. These were mostly trailers for horror movies as well as examples like "1917", "Dunkirk" and "Gladiator". Challenging yes, with many life-at-risk tension moments, but mostly contrived to be bloodless. It was very difficult to find any example clip that showed blood. It appears that a convention has developed that bloodless violence is OK. Reflecting on that I agree that blood is an issue and I should restrict a film that depicts it. However, how OK is it to have wide audiences for otherwise realistic violence without blood? Advances in movie tech are making bloodless violence more intense. We are seeing entertainment violence that is missing violence realities like long term pain and suffering: including a lifetime of guilt and remorse for the perpetrators after a moment of impulse. Blood is a truth of violence. And film-makers should tell the truth. To age-restricted audiences rather than using the bloodless excuse to market violence to a wider audience.

Compare with the Murder Scene in the Opera "Carmen".

I am re-editing our animated short "The House of Seville" using Adobe Premiere. It needs an extensive audio re-edit.

It was originally edited in Ulead MediaStudio 8 which is no longer available.

I can use the output video as a guide track for re-editing in Premiere. Reconstructing multitrack audio sequences is the biggest challenge.

Open the MediaStudio Project file in a simple text editor. I use "WordPad".
The "project file" has an extension "dvp" eg "vedScene06_v12_QS.dvp"
A lot of the data appears as non-printing characters, but names of source files appear in uppercase plain text - like this:

And that gives us answers to IMO the most important recovery questions: which was the selected clip for a particular moment? and where do we find it? The old video then guides us as to where to position and how to cut.

Posted by iafilm at 2:08 AM No comments:

IAFilm is publishing "The Master Weaver: Tales of the fantastic for grownups" by Bronwyn Calder. The promo experiment is to make the e-book version free for 3 days: 18, 19, 20 Aug 2021. Will this giveaway work as promo? Will it result in any positives? We are doing our indie thing which is to run the experiment to find out.

The Amazon Kindle has developed into a reader that can run on many devices including most phones or tablets. It can also deliver through its web page.

As an alternative for anyone without an Amazon login, we have a sample story free to read on the IAFilm website:
"Gift of the Sea" - read on IAFilm 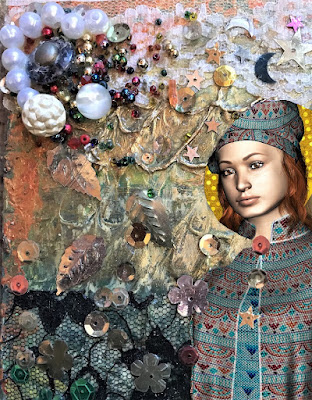 Posted by iafilm at 3:11 AM No comments:

On 17th April 2020, the BBC website published this article:
"Why does cinema ignore climate change?"
https://www.bbc.com/culture/article/20200416-why-does-cinema-ignore-climate-change

Climate change drama makes a welcome brief appearance in "Loki", a big budget fantasy+scifi TV-web series. The protagonists do time travel visiting apocalypses. One of these is a near future climate-change-induced catastrophic hurricane destroying an entire corporate town owned by the  "Roxxcart" superstore, which looks like a parody of "Walmart". Message: hey corporate America, take responsibility for dealing with Climate Change else this is what will happen to you.

Link  to the "Loki" trailer which includes a very brief clip of the Roxxcart scene:
https://www.youtube.com/watch?v=nW948Va-l10

"Loki" is good enough to rate as alternative indie. Is this because the creative principals are women? It has remarkable layers of allegory and satire with the villains being a satirical take on authoritarian regimes. A big influence is "The Trial" by Franz Kafka. We can see that in the beginning of the trailer. The "Time Variance Authority" is a high tech setup with a 1970s retro design look to its layout, equipment and gadgets. And a lot of clumsy bureaucratic paperwork that moves inexorably to doom for its victims as in "The Trial". My following description may or may not be a spoiler - this is my guess as to where this is going after seeing the first 3 episodes. The Authority's mission to bring order to the "Sacred Timeline" threatens to remove free will from the universe. An unlikely flawed antihero, Loki the Norse God of Mischief, Marvel comics version, must step up and save us all.

Congratulations to director Kate Herron, writer Elissa Karasik and their team for going above and beyond the expectations and formulas of this genre. It appears that Marvel Studios is giving its creatives freedom to play variations on their fictional universe in a way that the "Star Wars" franchise is failing to do. "Loki" succeeds where "Rogue One" disappoints.

Posted by iafilm at 3:18 AM No comments:

Now that our indie epic "Brave Love" is looking good for completion next year (2021) we are thinking about how to screen it.  I saw 2 different indie movie screenings this week. Both successful with good lessons for us. Both venues were large "lounge" spaces with big comfy sofas and armchairs so an audience size of 25 - 30. They were both full.

"The Man on the Island". Feature documentary, at the Monterey Cinema Takapuna, Mon, 23 Nov 2020. Presented by the film-maker Simon Mark-Brown with a Q and A session. Simon said it well that there are many eccentric characters who we may think of filming. However Colin McLaren is an eccentric character with depth of character and that is what makes this film work well. Simon noted that the current drop in commercial output had made it easier for films like his to get into cinemas. However the opposite may apply to "Brave Love" est. Sep-Oct 2021 with a flood of held-back product. In the 80s and 90s we had a good time doing Super-8 shows in cafes, music festival tents and other non-cinemas, so what does a modern equivalent look like? "Golden Nugget".

"The Golden Nugget International Film Festival". Tue, 24 Nov 2020. Shorts screening in a sports bar at the Kingslander pub. Presented by organisers Emme Lentino and Alex Wilson. The films covered a wide range, beginning with "Cinema of Unease" then moving to what I will label "Cinema of Exhuberance".  Many of the films displayed high production value looks on minimal budgets, as in amazing costuming and attention to detail: especially my show favourite, the satirical and super-exhuberant "Antifeminist".
https://www.sofijasztepanov.com/antifeminist

Emme and Alex were very active hosts. And exhuberant like their show. They welcomed and talked to everyone. They warmed up the audience so we became comfortable talking to each other. The bar was in the same room, closed while the films were playing but open before, after and during the interval. Yes, there was an interval. It worked well to have the one space for films, eating, drinking and socialising. They also had sponsorship from SkullCandy Headphones. We all got SkullCandy beanies and there was a prize draw for a set of  'phones. A second prize draw was for a 15 min podcast interview to promote your business venture. Lessons: (1) do active hosting. (2) events now need an event backdrop for the photos. This is the first time I have seen one at an NZ film screening.

Me and Emme Lentino 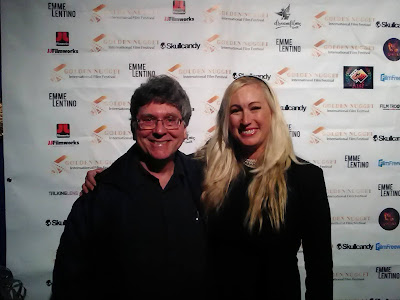 Alex Wilson and me 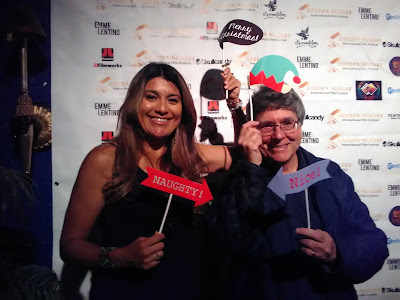 
I needed to digitise music from a cassette tape.
I was recording with the software "Adobe Audition 2017"
I first tried "Noise Reduction". That reduced the background noise but I had the feeling that it had also made a small change to the music.
I then tried using 2 x simple low impact treatments then finishing off with "Noise Reduction". This gave a much better and IMO usable result:

What I was thinking was that the "Noise Reduction" might work better if I could get the noise level down first by simpler means. It worked first time for this example. I am sharing it here in case the  general principle can work for others.

Music is "Walled City" composed by Ian Eccles-Smith for our film "Walled City" made in 1987. Recovering the music is part of my current project of digitising this movie.
The tape is a chrome tape. Player is a Panasonic SA-PM21 which is a domestic mini home system. I was using an audio cable with 3.5mm plugs to run from the headphone jack to the line input (blue) socket of a desktop computer. Noise in silent passages was about -40 dB which is a "good" as in low value in theory but it sounded unacceptable to me. The above 3-step process got it below the measurement scale ie below -60 dB and silent passages sounded completely silent.